In 1862, after his apprenticeship as a piano and organ-maker, Josef Anton Pfeiffer founded the Flügel- und Klavierfabrik J.A. Pfeiffer. The workshop soon proved too small, and only after a sleeping partnership had been established in 1864, could the rising demand be met by moving to larger premises within Stuttgart. By 1872, the thousandth piano had already been produced. The good reputation of the pianos was assured by the sophisticated concept, quality craftsmanship an their beautiful tone.

Three of the founder's five sons became piano-makers. Carl Anton studied piano-making in Berlin, London and New York and took over the company in 1888. The company was renamed as the Carl A. Pfeiffer company in 1912. His particular talents and hard work enabled him to solve technical and acoustic problems in all areas of the enterprise that he had inherited from his father. It was his work that contributed to the perfection and the renown of the instruments. His advice and knowledge were sought by many museums and institutions of music. Thus, for example, he set up the Piano Section of the German Museum in Munich. Some piano-making tools still used today were invented by him. He was given an honorary doctorate by the University of Freiburg in recognition of his achievements in the field of piano-making.

Of his three children his only son Walter took over the company. Knowing the value of the practical, his father had encouraged him not just to learn how to make pianos, but also to acquire skills in piano action and keyboard-manufacturing. He devoted himself to the scientific as well as to the managerial aspects of piano-making. He wrote several manuals that today still belong to the standard textbooks on piano-making. His vision and diligence enabled the business to survive the critical years after the First World War. It was particularly his renown among teachers that provided strong support for the company. Fire bombs destroyed the factory in 1943. In 1947, Walter Pfeiffer's son Helmut assisted in the reconstruction of the company, and, following the family tradition, also learned piano-making. Production according to unavoidable modern requirements followed in their newly-opened factory in 1961. These developments are inevitable even in the making of instruments. The significance of hand-craftsmanship, however, has not been diminished by the use of modern production techniques. 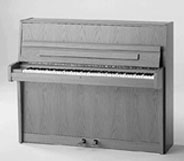 When the new factory started in Herderstrasse, all instruments were re-designed and particular attention was again paid to quality, ad also customer service and sales promotion. The new models were at once accepted and used in many fields. Radio stations, recording-studios, conservatories and music schools both in Germany and elsewhere used these instruments and spread their reputation around the world. 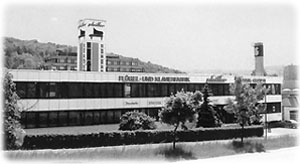 Helmut Pfeiffer's only son Georg also learned piano-making and afterwards studied business management in Zurich and Vienna. After taking his doctor's degree, he joined his father's company. Thorough planning was done to adapt further to modern requirements. In 1994, the company moved to Leonberg. Production was restructured and spacious showroom was set up with an adjoining concert-hall.