What does Pfeiffer have to do with Mercedes-Benz and Porsche? An American agency for Pfeiffer pianos advertises with this question in the guide to the US music instrument industry. The Americans make comparisons between exceedingly different products, which however have one thing in common: They are quality products, which enjoy the utmost esteem world-wide and come from Germany. Corporate size and production figures of course cannot be compared. A few hundred pianos as against hundreds of thousands of motor-cars. And yet this "made in Germany" is the common trade mark. 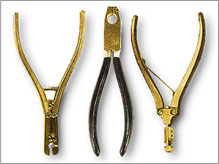 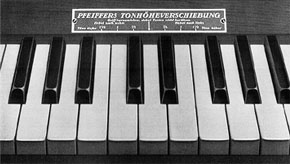 The motor-car is over 100 years old and Stuttgart, alongside Mannheim, is its birthplace. Pianos are much older. The history of the piano dates back more than two centuries. The first known piano e forte action was invented in the early eighteenth century by an Italian named Bartolomeo Cristofori. Since that time we have had at our disponal a keyboard instrument on which (unlike the harpsichord) it is possible to play both "soft and loud". Since 1862 the house of Pfeiffer has always paid attention to melodiousness - be it soft or loud. After the company seat was registered in Stuttgart for decades, grand and upright pianos have been built in Leonberg near Stuttgart since 1994, not far from the production centres of the other Swabian quality products - simply German high-class workmanship. Yet these particular masterpieces are older - and destined to continue giving countless years of pleasure. A piano can go on rendering faithful service for a hundred years and longer. In fact, it is not unusual for a good old piece to be returned to us for an overhaul, and then, "rejuvenated", continue providing pleasure to the following generations.

Joseph Anton Pfeiffer, a piano and organ builder from Riedlingen in Upper Swabia, could never in his wildest dreams have envisaged that the craftsmanship of his descendants and successors Carl, Walter, Helmut and Georg Pfeiffer would one day, more than 140 years later, be compared to the most exclusive "horseless carriages". When he took up residence in Stuttgart, the town was not yet the world-famous industrial metropolis it is today. In those days the King still resided in the capital of Württemberg, and in 1906 Carl Anton Pfeiffer became purveyor by appointment to the artistically-minded Monarch. Although the court instrument had a different cabinet from today's piano, being styled according to contemporary tastes, and a lighter cast-iron frame design, corresponding to the lower pitch then in use, in essence, this piano represented the prototype for the piano we know today.